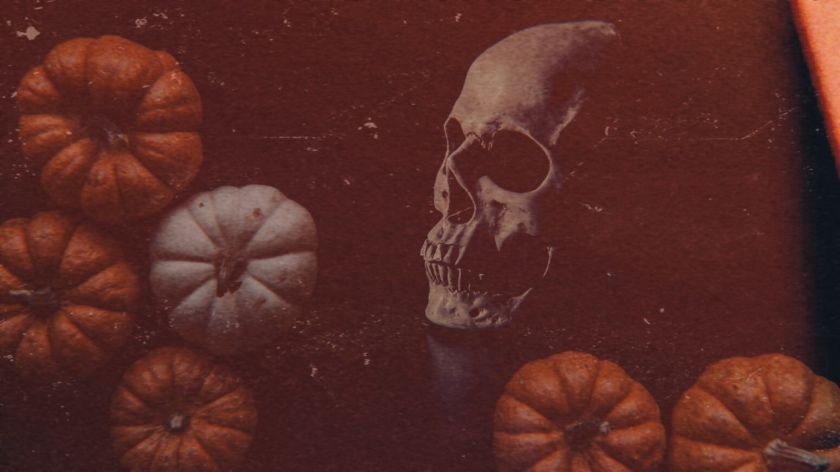 Fall may not arrive until later this month, but everywhere you look, people are trying to will it into existence.

Down here in the south, the kids are in schools, pumpkin spice lattes are in coffee houses, and Halloween is on shelves.

It may be 90+ degrees out, but summer has been declared dead. Fortunately, there are plenty of books, shows, and movies to enjoy in air conditioning until the weather catches up with our collective mood.

“Life-long small-town community member and advocate Hilarie Burton Morgan visits different small towns in an effort to shine a much-needed light on the unique ways in which crime impacts rural communities and their judicial systems.”

Devil in Ohio streaming on Netflix

“Determined to protect a young patient who escaped a mysterious cult, a psychiatrist takes the girl in, putting her own family — and life — in danger.”

The Lord of the Rings: The Rings of Power: Season 1 streaming on Amazon Prime.

“Beginning in a time of relative peace, we follow an ensemble cast of characters as they confront the re-emergence of evil to Middle-earth. From the darkest depths of the Misty Mountains, to the majestic forests of Lindon, to the breathtaking island kingdom of Númenor, to the furthest reaches of the map, these kingdoms and characters will carve out legacies that live on long after they are gone.”

“The Hull family has owned the Gallows Hill Winery for generations. Their wine wins awards. Their business prospers. Their family thrives. People whisper that the curse has awakened once more.”

Indian Predator: The Diary of a Serial Killer, Netflix

“When a suspect is found in a journalist’s murder, the case is considered closed until a secret diary suggests 13 more victims — and possible cannibalism.”

“In this “Trapped” sequel, Andri and Hinrika dig into the murder of a cult member linked to a biker gang’s land dispute and a woman’s 2013 disappearance.”

The Anthrax Attacks streaming on Netflix.

“Days after 9/11, letters containing fatal anthrax spores spark panic and tragedy in the US. This documentary follows the subsequent FBI investigation.”

According to almanac.com, “The full Moon that happens nearest to the fall equinox (September 22 or 23) always takes on the name “Harvest Moon.” Unlike other full Moons, this full Moon rises at nearly the same time—around sunset—for several evenings in a row, giving farmers several extra evenings of moonlight and allowing them to finish their harvests before the frosts of fall arrive.”

The Butcher and The Wren: A Novel by Alaina Urquhart on shelves.

From the co-host of chart-topping true crime podcast Morbid, a thrilling debut novel told from the dueling perspectives of a notorious serial killer and the medical examiner following where his trail of victims leads

Something dark is lurking in the Louisiana bayou: a methodical killer with a penchant for medical experimentation is hard at work completing his most harrowing crime yet, taunting the authorities who desperately try to catch up.

In the Hands of the River by Lucien Darjeun Meadows on shelves.

“In his beautiful collection, In the Hands of the River, Lucien Darjeun Meadows examines the wildness and the wilderness of an Appalachian childhood. Here, landscape is ever-present and constantly on the cusp of change—mountains become scars, insect examinations become executions, and homes are one rain away from gone.”

“When a billionaire’s wife vanishes, Norwegian police must deal with the frenzied press and deceitful informants to find the truth. Based on real events.”

“Twin brothers arrive at their mother’s house and begin to suspect that something isn’t right. Remake of the 2014 Austrian film.”

“A group of LA teenagers arrested in 2009 for stealing from celebrity homes inspired a media frenzy and a movie. Now, two of them tell their stories.”

First day of fall. Autumn Equinox 2022 in Northern Hemisphere will be at 9:03 PM EST.

“A 1950s housewife living with her husband in a utopian experimental community begins to worry that his glamorous company may be hiding disturbing secrets.”

Fathom Events screens Poltergeist for the 40th Anniversary of its release.

Jupiter will be closer to Earth then it has in the past seven decades, and visible to the naked eye.

House of Hunger by Alexis Henderson on shelves.

“WANTED – Bloodmaid of exceptional taste. Must have a keen proclivity for life’s finer pleasures. Girls of weak will need not apply.

A young woman is drawn into the upper echelons of a society where blood is power in this dark and enthralling Gothic novel from the author of The Year of the Witching.”

“A community of amateur traders enacts a daring plan to get rich quick and wreak havoc on the stock market. But can they beat Wall Street at its own game?”

Follow Everyday Strange on WordPress.com
Apple cider iced tea and next year’s Halloween countdown calendar. It’s finally Fall!!! 🎃
I wasted years on my life on diet culture, counting calories, and try to reach a weight my body was fighting against. I’m much happier enjoying food, exercising for stress relief and fun, and drinking smoking cocktails.
After spending years as an office manager with a generic desk because no decor was allowed, I’m working on making my home office as weird as possible. Latest addition is this vintage poison antidote kit.
The best finds for spooky season are at antique malls and thrift shops 💀
Weekend hike at Stevens Creek Nature Preserve, enjoying the last wildflowers of summer 🌼
Day flowers at Stevens Creek Nature Preserve. The beautiful blue flowers only last for one day, but this plant is incredibly resilient. The seeds can germinate up to four years after falling to the ground.