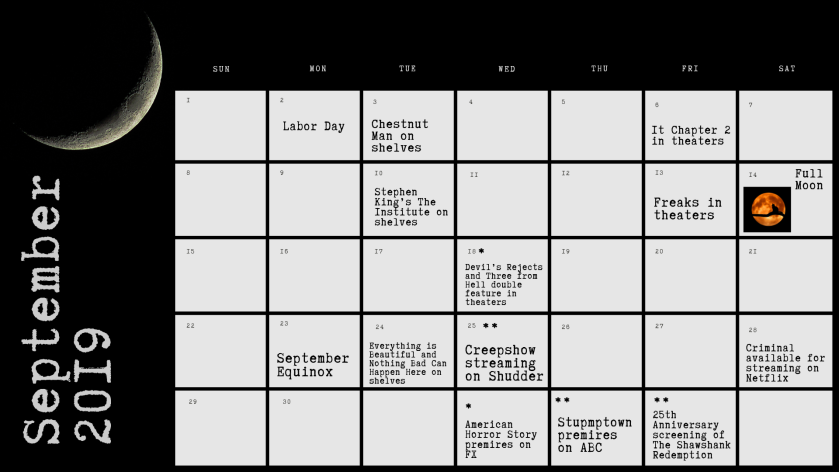 Each month I look for TV shows, movies, and events to look forward to.

Stephen King’s The Institute on shelves. King has written over 60 best sellers, and his latest offering is set in a mysterious institute in Minneapolis conducting terrifying experiments on children with paranormal gifts.

Freaks released in theaters. According to imdb.com, Freaks follows Chloe, who “discovers a bizarre, threatening, and mysterious new world beyond her front door after she escapes her father’s protective and paranoid control.” Apparently the less you know going in the better.

Fathom Events Three from Hell and Devils Rejects double feature in theaters. The latest chapter in Rob Zombies ultra-violent saga, 3 From Hell will reunite Baby Firefly, Captain Spaulding and Otis Driftwood to once again wreck havoc and terrify anyone that passes in their line of sight.

American Horror Story: 1984 premieres on FX. This season of the anthology horror series is styled as an an 80s slasher film.

Netflix’s new series Criminal is available for streaming. The show is taking a different approach, with each episode taking place entirely during an interrogation between police investigators and a suspected criminal. The 12-episode series will also be divided in four parts, with each taking place in a different country (UK, France, Spain, and Germany)

Everything is Beautiful and Nothing Bad Can Happen Here by Michael Wehunt published by Nightscape Press. One third of sales will be donated to the Southern Poverty Law Center.

25th Anniversary one night screening of the classic movie The Shawshank Redemption.

Stumptown premieres on ABC. Based on the series of graphic novels by the same name, “Stumptown” follows Dex Parios, an Army vet now working as a PI who is also wrangling a complicated love life, gambling debt and a brother to take care of in Portland, Ore.

Creepshow available for streaming on Shudder. Reviving an old favorite, the series boasts surprising talent in front and behind the camera and the trailer was well received this year at Comic-Con.

Follow Everyday Strange on WordPress.com
March writing prompts 🖤✍🏻
🖤🌬
Backyard bird watching is one of my many pandemic hobbies. Definitely been noticing a lot of cardinals lately.
🥀🖤
On the Road Again 🖤
🌬🔥🖤